I have always wondered, as I look into my children’s eyes, how they view our lifestyle. The law enforcement lifestyle, that is. At such young ages, I know they see a difference. They ask questions about why their daddy is working at night when their friend’s daddy’s are at home. They question why he sleeps during the day and why we can’t have friends over during the day to play. They noticed these things more when we moved into a neighborhood full of families. We play with neighborhood children whose families don’t live the law enforcement lifestyle. I always answer their questions as best as I can explaining their daddy’s very important, heroic job.

However, there are times I still wonder what they are quietly thinking, but are unable to verbalize. That is when I decided to switch gears. I wanted to gain more insight and background into what my children may experience, how they may feel or view situations. For this kind of situation, it is helpful to view through a different lens.

That is when I talked with Crystal, a cop’s daughter. She was able to give us an awesome view point on what it is like growing up first responder style. Bonus: she is funny, too 😉 Some of the rules she talks about are SPOT ON! Even if you don’t have kids yet, her story is so relatable. I can absolutely see my husband doing so many of the things her dad did, as well.

PPW: How many years did your father work in law enforcement?

Crystal: My dad worked in law enforcement for about 18 years. He started out as a uniformed officer and towards the end of his career he worked for a multi-agency taskforce. Over the years, he worked as a patrol officer, in the crime scene identification unit, with the K-9 unit, and for local and federal taskforces – sometimes undercover as well. After 18 years, he’d had enough of dealing with the life and the dangers it posed to himself and our family. So, he quit, cashed in his pension, and started a restaurant.

PPW: Growing up, do you feel like your life was “different” compared to your peers? If yes, how so?

Crystal: Yes. Different, but not bad, by any means. My sister and I were pretty good kids. We really didn’t test boundaries. Dad’s word was law, and while that might seem harsh to some, we never questioned it. We knew how much he loved us and that everything he did was to keep us safe, so we went along with it.

There were rules we had that other families didn’t:

When I was younger, he worked as a patrol officer and  in the crime scene unit, so I was still able to tell people what he did. However, when I was a teenager (and my sister was a toddler), he worked with a few taskforces. We had to teach my sister from a young age to not tell anyone dad was a police officer, and that she couldn’t speak to him if we ran into him in public. It was tough for her. I was old enough to understand, but it took a while for her to get it.

PPW: What did you notice about your father’s job? OR Did you notice his schedule, long hours, less time, rescheduling of holidays?

Crystal: He worked all the time. Not only did he work his regular shifts, but he also worked as many extra jobs as he could to save up money. I knew from a young age that he didn’t have a “regular” job like some of my friend’s dads. I just took it in stride, though. My dad has always been one of my heroes, so I never thought anything different of it.

When I was young, we’d get to see him sometimes mid-shift to bring him dinner, or we’d see him at his extra jobs. When I was a teenager, he was working on taskforces and undercover sometimes, so we didn’t see him for days at a time. It was hard on him, us, and my parent’s marriage. Little did my mom know when she married him that she was signing up for a lifetime of single parenting whenever there was a disaster or emergency. Dad always had to work those. And, my little sister didn’t get to pull the “my dad’s a cop and he can arrest your dad” bratty move given the type of work he was doing. Haha!

PPW: Did your father or other members of your family share information about your father’s job? If yes, please elaborate.

Crystal: Yes and no. My dad worked some absolutely brutal cases and scenes. Before I get into any stories, let me say this first: My dad was an exceptional father. No matter how horrible his day was, and what awful things he saw, he NEVER ONCE brought that home. I have no idea how, but he always walked into our home smiling, and ready to play horsey or pretty, pretty princess, or whatever we wanted to do for hours on end. The man watched more Dirty Dancing (my sister’s and my favorite movie) than any man should ever have to endure! Now as an adult, thinking about what he had to deal with, I still have no idea how he did it. My sister and I never once doubted how much that man loved and cherished every moment he spent with us.

As kids, we knew Dad was a police officer, and we were told when his job duties changed (patrol to crime scene, etc.) but we really didn’t know specifics. We knew he sent the bad guys to jail. That he sometimes got hurt doing it. And that his job was very dangerous. As adults, we found out more about some of those bad stories, but not everything. He didn’t like to tell us too much, of course. And we respected that.

We’d hear funny stories from time to time, here are a few of my favorites:

Crystal: I 100% respect and love our law enforcement and first responder community. Both then, and now. These guys and girls get out there and do a dangerous, thankless job every day. They get spit on, yelled at, shot, and beaten by the very people they’re trying to protect. In today’s instant access society, there are a lot of armchair detectives who rush to judge officer-involved incidents. I am not one of them. I believe that law enforcement is there to protect me and serve my community, and I will do everything in my power to help them with that.

PPW: Do you have any special memories related to your father’s job in law enforcement?

Crystal: Well, they’re all special memories now. My dad was killed in a car accident last year. So, all of these stories and tales are very special to my mom, my sister, and me. At his memorial service, there were police officers who he hadn’t seen in 20 years – and they all came just to pay respect and tell us what a great man he was. After twenty years, they remembered his kindness, his humor, and his amazing spirit! I can only hope I leave a legacy like that!

PPW: If you could share a message with other children whose parents are in law enforcement, what would you say?

Crystal: When a person becomes a police officer, it doesn’t just impact that one person – their whole family must learn to adjust to this new life. You have a very special job. It’s not an easy one, but it’s very important. You are the child of a law enforcement officer, and you have to act a little differently sometimes. Sometimes, you’re not allowed to do the fun/cool things because they’re too dangerous. And sometimes, you can’t go to so-and-so’s house even though they’re throwing an awesome party. Your job as a LEO kid is to accept this, and be OK with it. One day, your parents will explain why these things are so important, and why keeping you safe is so important. Your parent is not just your parent. They’re also a hero!

PPW: Please share any other information that relates to you having a parent in law enforcement. (Feel free to discuss anything you would like, giving as much detail as you would like).

Crystal: Some LEO kids might not agree, but I’m glad I grew up as one. I have a healthy respect for law enforcement. I know how to behave during traffic stops. I knew my dad was putting his life on the line every day, and I admire him for doing that. I learned more about bravery and courage from him simply reporting to work everyday than I did from any comic book or movie. I had to keep my nose cleaner than most, but that’s actually a good thing, too! I have better situational awareness than most of my friends, even now. No matter what his job was, my sister and I had an amazing dad!!

I can’t thank Crystal enough for such a detailed look into her law enforcement life. Your father sounded like an absolutely amazing man and hero. Not to mention, hysterical! It truly helped me realize just what my girls may experience one day. I am so implementing the “password rule” in my house now!

Tell us: What is your favorite piece from Crystal’s interview? 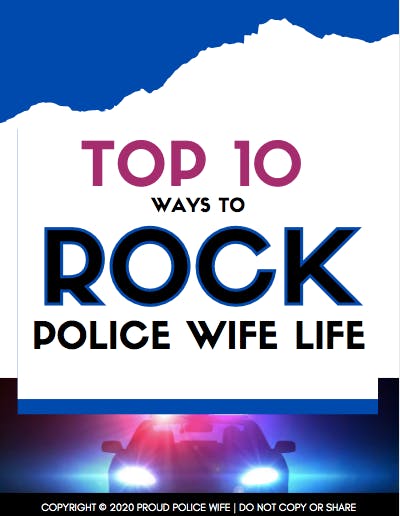 Blessed are the peacemakers for they shall be called the children of God.
- Matthew 5:9
424 shares